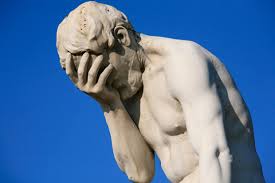 It was with mixed feelings that I accepted the invitation to speak at the Institute of Fundraising’s workshop on fundraising failures. I mean it’s always nice to be asked but couldn’t it have been for something a bit more helpful to my business? What would have been wrong with “Why I am utterly brilliant” as a session title?

I guess you have to work with what you’ve got….so failure it is then.

Actually, I love failure. I fail a lot  I fail often.  And sometimes really quite messily.

I am talking professionally here. (My daughters can contribute plenty on the personal front but we’ll move quickly on from that. I mean anyone can nearly set fire to their house can’t they? And the baby falling down the stairs incident was a long time ago)

No in a work context, failure is very important. Fundraisers are in the changing the world business. Our job is to make extraordinary things happen. We are simply abdicating that responsibility if we don’t take risks. Which means we must inevitably, from time to time, fail.

If you haven’t failed at something recently, you are not trying hard enough.

Of course you shouldn’t be failing all the time or repeating failures. The key is to actually learn.

And there’s much to learn from failure. Most of the things I’ve done in my career which were the most successful weren’t so from the outset.  There were false starts and missteps along the way but without going on this journey we never would have found the recipe for ultimate success.

A lot of things in fundraising fail because the time just isn’t right. I can remember my first major online fundraising campaign in the late ’90s which involved sponsoring blind children to climb Mt Kilimanjaro. It bombed spectacularly. We didn’t understand the medium sufficiently and lacked the tools such as Justgiving which made online sponsorship work. But we learned much in the process.

There are some things which never live up to their promise,  for example I’ve spent a lot of time over the years on trying to get various forms of affinity or reward schemes to work for charities.  In the end I came to the conclusion that getting donors to buy stuff because it benefits the charity they support is pretty hard actually. Generally it is just better to ask them to give money.

It was someone else who organised a direct response TV campaign in Bermuda, which wasn’t a completely stupid idea. But getting mixed up about time zones so the ads ran at 3am  when the call centre was closed was a bit harder to justify…

But, hey. It’s better to try too hard and make the odd howler than sit back and enjoy the easy life.  It means you will fail from time to time. But each failure will teach you ten times as much as every success. You should be proud of them.

Not sure it’ll mean anyone will ever hire you again, mind.